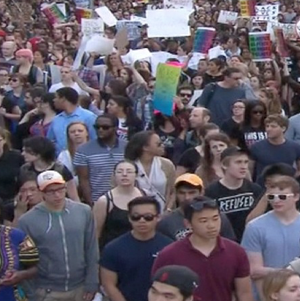 Protest is Our Responsibility

In the Acts of the Apostles we are told many times of how the apostles, Paul, Peter, Silas, Timothy and others confronted the religious and government authorities. They did so in the synagogues and on the streets of the cities. Sometimes they were harassed and beaten by the police; other times they were accused of being “babblers”; at other times men and women believed and accepted their message; and often they spent days and nights in jail. They were protesting the worship of idols and the unwillingness of many of the Jews to accept Jesus as the Messiah. They caused civil unrest and even riots in some of the cities. They were dissenting from the status quo; they were protesting what was; they were proclaiming an alternative way of life centered in Jesus.

As have Christians throughout history, we too are called to be responsible citizens and responsible Christians. At times this is easy, but at other times the tensions and ambiguities between these two roles are not easily resolved. In the wake of extreme police brutality and killing, the increasing feeling by blacks that their lives are constantly under threat, and the continued oppression and renewed pandemic of racism I firmly believe that each of us has a Christ duty to protest. I firmly believe that we must as good citizens be concerned about the “schoolyard bully” and militaristic approach to injustice that is being taken within many sections and levels of our government.

It is time to listen to the anger, not further inflame it. Charles M. Blow in his New York Times article on June 1 wrote:
“This is anger is over feeling powerless, stalked and hunted, degraded and dehumanized. It is an anger that the scenes keep repeating themselves until one feels exhausted and wrung out. It is an anger over feeling that people in power on every level – individual officers as well as local, state and federal government – are utterly unresponsive to people’s calls for fundamental change and equal justice under the law and equal treatment by it.”
It is time to repent of the sin of racism and act to bring about change within our communities and nation.

For some of God is leading us to conversations with our friends, neighbors and those who are different from us. For some we are being led to write letters to government officials. All are called to pray. Some are called to do silent protests forming circles of love in their neighbors. Others God is calling to take to the streets, to march and carry placards, to be arrested and spend time in jail. Whatever form the protest takes, it is important and a way of witnessing to your faith in God’s values of love, justice and righteousness and an expression of love of others and our country. Hopefully our protests will be done as acts of non-violence and with words that are spoken gently but firmly.

May the Holy Spirit give us the courage, the understanding of justice, and the means to protest the racism and white supremacy that is alive and well in our country.